Skip to content
HomeBalanceTips for Families and FriendsFind Personal and Relationship TimeWorking the Rails, Balancing Family 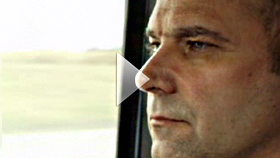 "You have to stay safe—your family depends on it."

Open lines of communication within the family are essential, Mark Kramer and his wife, Paula, agree. In the section below, they tell how they organize their lives to assure they both get the sleep they need, while maintaining a successful marriage, and enjoying time together with their son.

I started work for Union Pacific in Omaha, in 1978, right after I graduated from high school. I began in the building and bridges department, and then became a switchman. Later, I became a brakeman working with the conductor and engineer on a train, and then a conductor. In 1992, I became a locomotive engineer. I carry freight, not passengers.

Even if you've been in the industry for 30 years your body's never used to trying to sleep in the middle of the day or in the early evening. One of the most important things is having a family that will help you try to rest, and understand what you're trying to do.

In the early '90s, I went with my cousin to Kansas City one weekend. A friend introduced me to Paula there.

Paula
During the two years we dated, I lived in Kansas City, Missouri, and Mark lived in Omaha. We drove three hours each way once or twice a month to spend weekends together.

We were in love. We had fun on weekends. I didn't know Mark often took time off to see me.

Mark
I was trying to win her over. I sometimes worked a local then, and had more freedom to arrange my schedule.

Paula
It was only after we married in 1991, and I moved to Omaha, that I learned the reality of living with Mark's unpredictable hours.

Being in a new city, without my own family or friends nearby, I was lonely at first. Other people, even Mark's family, would invite us to dinner or other events. They thought it strange that we couldn't tell them until the day before if we would be there.

When Mark was home sleeping in the daytime, I tried not to talk on the phone in our apartment. I worried that cooking smells would wake him up.

Mark
When I come home from a trip, and go to sleep, I'm usually dog-tired. I don't hear anything for at least three to four hours. When I expect to be called for work, and try to sleep in the daytime, I can hear leaves falling off trees.

Paula
I found a great job, selling real estate. I have flexible hours. Many of my friends also are realtors.

Our son, Alex, was born in 1995. When Alex was small, I often took him to the mall in the daytime, so Mark could sleep in peace.

Mark
I don't remember being bothered by Alex's crying. When you have babies, you're young. You handle sleep disruption better.

Paula
I participated in a golf league for a few years. I had to give that up, because I had to cancel babysitters too often. Neither Mark nor I felt it right to have a teenager in our home while Mark was sleeping.

When Mark is home, we try to have family meals together. Sometimes we eat dinner at 4 AM.

Mark
When you need to rest before a night run, it can be a good idea to move your mealtime up an hour or two. What you eat is important, too. You are not going to eat chili, and then go to bed.

Paula
About 10 years ago, Mark started snoring so loudly I could hear him from another room. He sometimes woke up choking and coughing. He was crabby because he couldn't get his sleep. I insisted he see a doctor.

Mark
The doctor sent me for an overnight sleep study. In 2001, I found out I had obstructive sleep apnea. I use a continuous positive airway pressure (CPAP) machine that helps me breathe better while I sleep. At first, I used it only at home. I found it too cumbersome to take on trips.

I realized I slept so much better with it, and had so much more stamina while I was awake, that I bought a second CPAP device to leave at my away from home hotel, where I stay a couple of times a week. The CPAP machine also helps my sleep by drowning out noise.

About five years ago, we moved to a new house. Paula and I now have separate sleeping rooms. I have black vinyl on the window in my room so I can sleep better in the daytime. Paula needs her rest, too. My phone calls don't disturb her sleep.

I sleep better at home than away from home, even after all these years. Other railroaders say that, too. When we sleep at the hotel, we often can't stay asleep for more than five hours.

On the trip home, I have to work hard to stay alert. I chew gum, snack, and talk to my conductor who's tired, too. We keep each other going.

Paula
Railroad pay is good, and Mark gets five weeks' vacation in the summer. Those are pluses of railroad life.

Most people don't have a clue about the everyday challenges railroaders and their families face. The husband of one of my closest friends is a pharmacist. He often works at night, but his hours are predictable.

Mark
You want to have everything ready to go. That way if you do get caught short, you know where everything is. You can go at a moment's notice.You want to know where your bag is, you want all your equipment and everything stowed in the same place. You want to stay organized.

You need to know how to use the computer and know how to try and forecast when you are going to go to work.

Paula
I try to help him out by making sure it’s real quiet in the house. I like to turn the house phone off, and try to catch anybody that comes through the front door.

Mark and Paula
Our family time together is what makes everything worthwhile.